dms October 26, 2016
Like 0 Thanks! You've already liked this
Self-Publish, University of Chicago 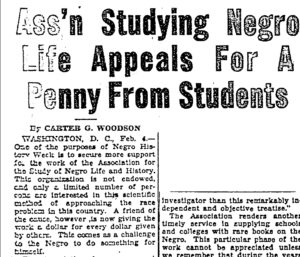 In an effort to justify ending a century of self-publishing, the current president of ASALH, speaking to the general membership at the 101st Annual Meeting, spoke at great, great length about Woodson’s midnight crisis moment in 1920 when he offered to sell, literally sell, the Journal of Negro History to the NAACP. The document revealed how Woodson funded the journal from his own pocket. When times got too hard for him personally and he had to part ways with Howard University, he could no longer afford the journal. He survived that episode by landing a job at the West Virginia Colored Institute and reaching into his pockets to publish the journal.  Clearly library subscriptions were not adequate to publish the journal, and clearly his board was not willing to lift that load.  He should not have had to quit the program had those who espoused love and commitment had stepped up.  He survived by reaching into his pockets again and again.  Twelve years later, by the Great Depression, he was better known to the public, and so he reached out to the black community to raise money.  Indeed, Woodson appealed to funds from the black public–including youth–to raise pennies to keep going.

Now today, the leadership of ASALH is trying to sellout our century of self-publishing without reaching into their own pockets as board members.  There is not a Woodson in an officer’s post willing to put a share of their income on the table for the crisis they say exists that threatens the well being of the whole Association.  But there is no crisis, especially not in the funding for the journal.  The Journal of African American History is still making money.   I hate to say this–I really hate to say this–don’t believe the report that treasurer and CPA, Gilbert Smith, gave the membership on the journal. At the Business Session of the  101st Annual Meeting of ASALH, he gave a partial report on the financial state of the journal, one that left an erroneous impression.  He reported that the auditors changed our accounting methods in 2015 and thus the journal made $500, but for some reason decided not to share what the typical positive revenue had been the last several years and would likely be this year after that adjustment in accounting procedures. Well, as one who handled these matters for 13 years, let me tell you that number is roughly $30,000, but it will decline as humanities journals (including ours) lose subscriptions from college libraries.

With $30,000 positive revenue from the JAAH, there is no crisis, but there is a need to transition. This is why I suggested the GetRightwithWoodson Fund, and will create for it for when this madness ends. This headline from 1932 shows how Woodson had secured a donor (gee, maybe himself) and was soliciting money from the black public, including children. He did not reach the low point of giving up self-publishing again–even during the Great Depression.