Our journal was independent and more profitable until a crew of people, led by Evelyn Brooks Higginbotham, Gilbert Smith, Sharon Harley, and Mr. Self-Determination, VP Franklin, decided that a century of self-publishing was enough.  To achieve this feat, they misrepresented the truth about the finances and ultimately disenfranchised the membership, and now the JAAH is under the management of the University of Chicago.   Yes, we still own Woodson’s journal but now we are so mis-educated that we need managers to make the very same arrangements we had been making.  Go figure.  You have seen the first product of the University of Chicago and the ink covers the page the same way it did when we directed a printer to do it.  They changed the font on the cover, but gee we could have done that too.  And the pictures look just as cheesy as always.  That is the nature of black-and-white images on non-glossy paper.

ASALH is currently electing new folks for the board–though not enough of them.    For officers, please vote for Lionel Kimble and Kaye Wise Whitehead.  They were right with Woodson.  Unfortunately, no one would run against Evelyn and Gilbert, so just don’t vote for those positions.  And please do not vote for Barbara Dunn.  I have known her for years, and supported her for most everything.  Yet despite being an advocate of Woodson’s Mis-education of the Negro, folks she was a leading spirit of selling out tradition.  Hurt my heart, but yes, it’s true.

For the Executive Board

Among the people who sold out Woodson who are running for re-election are Janet Sims-Wood, Sharon Harley, James Harper II, and Dorothy Bailey.  Please do not vote for them.  Let them go about their business. They have done enough damage.

In general, I am for people I know are right with Woodson.  Lionel Kimble has organized a slate, and I am for that slate.  I also am For Anita Shepard of the Jacksonville Branch.  She is Right with Woodson.  Please vote for her or one of the following on Lionel’s slate. 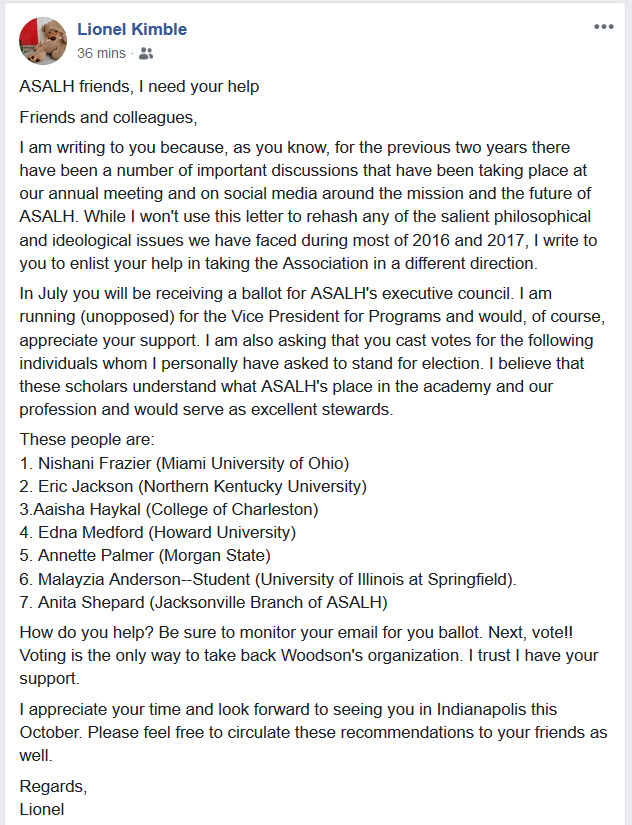 Do You Still Have Confidence in the CPA Who Reported Revenue as Profit? V. P. Franklin Self-Determines His Legacy
ASALH Politics, Featured, Governance, Self-Publish