The Regime’s effort to take our century-old Journal of African American History to the University of Chicago (Bae) is once again in trouble.  Other than money, the Regime could never point to any reason to go to Chicago except the pleasure of the esteemed press’s company.  Sharon Harley virtually said there was nothing in the deal for Chicago, except what they thought of us and our Journal of African American History.  It was beyond money.  That never satisfied many ASALHites since we have always loved ourselves and been wary of suitors promising things in return for control.  We have believed in the Woodson tradition of having a platform from which we could speak the truth about our past without a concern over whether someone would moderate what we publish.  Sensing that the love, trust, and belief in some other  entity, especially that university where White City used to stand, would not sway the rank and file of ASALH, the Regime resorted to the claim that revenues were profits.  Oh, we were told in our 101st Business Session that we were being wooed with money and free journals.  Oh, yes, there would be $100,000 in profits and a free journals in every mailbox.   Some of us knew better, but why would a certified pubic account, Gilbert A. Smith, simply lie like that?  And they had lots of folks fooled–including a number of retired former leaders who have been lobbying for the sell out.  (More appropriately, they are trying to stage a love out. T’aint no money in it.)

For months those of us opposed to the move have argued that the journals are currently as profitable as the Chicago offer, especially when the journal’s remaining expenses are charged to it and when the price of the so-called free journals are added.  Their Bae, we knew, has made no such promise.  They don’t love ASALH like that.  It’s about future positive revenue for them, and they will only spend so much in pursuit of it.  We also put $55,000 on the table for a reserve fund against future revenue decreases until we could put the journal on more stable financial footing.  These prudent measures had no effect on the love outs on ASALH Executive Council.  Functioning like a regime, they continued their plans to love out, ignoring our legal assertion that because there was still a motion on the floor of the Business Session.  Their contention remained that only the Executive Council had the authority to make the decision, and yet they knew their power over the council was waning.  New members had been elected precisely to stand for self-publishing.   We were poised to slog it out in today’s Executive Council meeting just like that, then JSTOR dropped a bomb.

In response to the University of California Press and the University of Chicago Press both leaving their Current Scholarship Program, JSTOR is ending it.  It was predicated on a 25% charge for marketing and other services.  To keep new scholarship alive and flowing into its main product, their archive, JSTOR has decide to function purely as a journals host.  This will save ASALH over $20,000 a year.  The effort to secret this program from the Executive Council failed, and now it is manifestly clear that self-publishing is a better financial move than going with the University of Chicago Press. 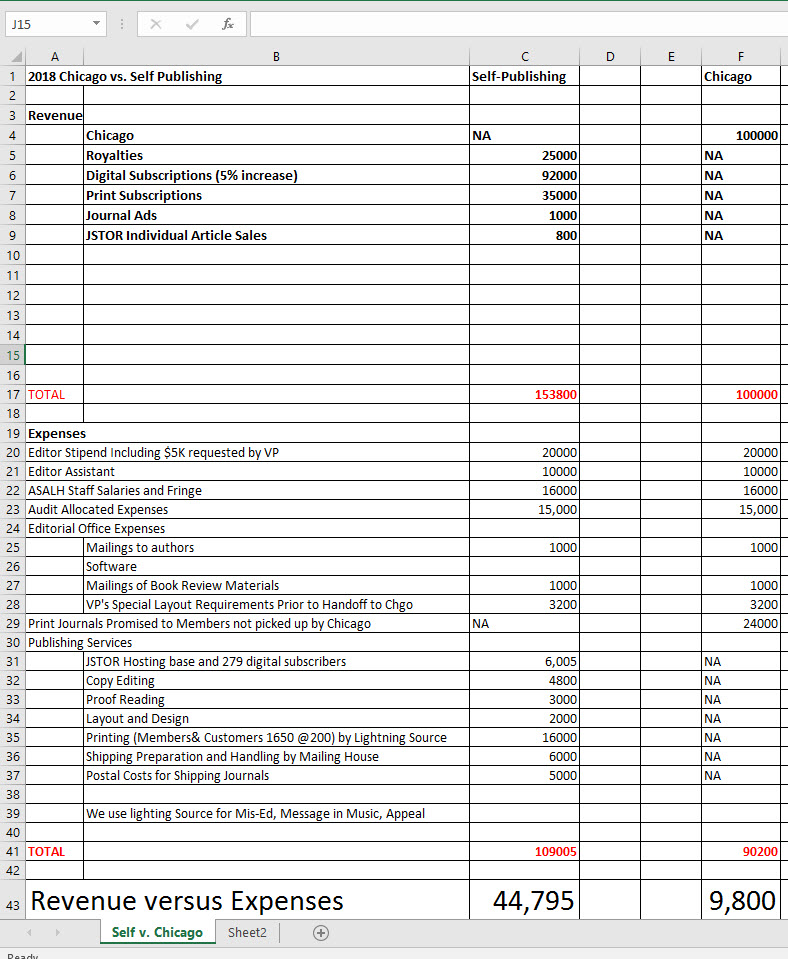 The financial outcomes of self-publishing get better in 2019 as we are able to reduce our costs because we are self-publishing.  Some of the expenses associated with VP Franklin’s unique editorial style and the creep from 600 to 800 pages per volume can be remedied.  This can be done not by cutting articles published but by reducing front and back matter, publishing reviews digital only, and ending the unnecessary indexes not needed in the digital age. 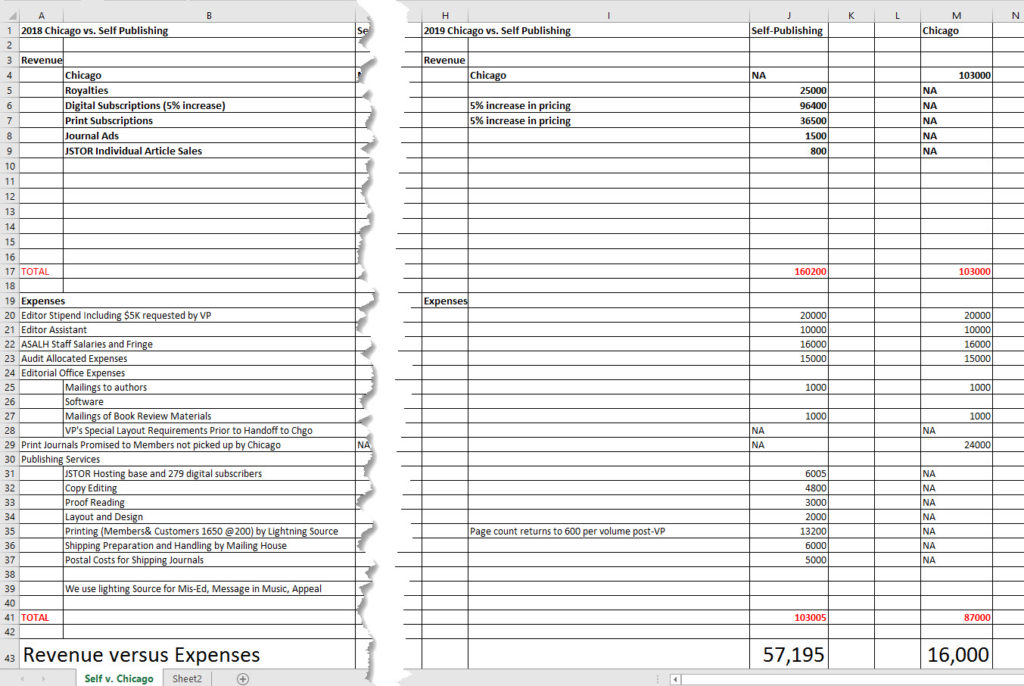 Where Is the Due Diligence of the Regime?

The regime enters the Executive Council meeting today without having provided the members of the board any of the things associated with such a major change in operations.  We have been self-publishing for a century–a hundred plus years–and none of the following has been proffered to justify the move.

We have heard rumors that the University of Chicago Press representatives might appear in person, but we have heard conflicting rumors that they will at best Skype in.  We believe it will be the latter because there is not any money in this for Chicago.   As I have written elsewhere, this contract for Chicago represents an effort to control a catalogue of intellectual property and build an archive.  The efforts to sell back tiles to existing customers stands virtually little chance to let them make of their $100,000.

Time to End This Time-Consuming, Pride-Driven Love Out–Take the $250,000 Advantage in Self-Publishing

The opportunity to end this mess is before the Executive Council.  A vote to go to Chicago will be challenged in court, if necessary.   Not only would it be a violation of fiduciary responsibility, it would also run counter to the motion on the floor of the 101st Business Session that forbids the board from ending self-publishing without the permission of the Business Session.

A year is along enough to make a case for ending self-publishing.  The Regime has not even attempted due diligence.  They have nothing.  Gilbert A. Smith has misrepresented revenue as profits, and he has not adduced any expenses against the $100,000 for anyone to explore because it would be an admission that he lied.  Remember, the good CPA reported that the Chicago money was all profit.

The opposition needs to lobby the fence sitters, and put a motion on the floor the charge the Executive Director of ASALH to sign the contract proffered by JSTOR for the Current Journals Program.