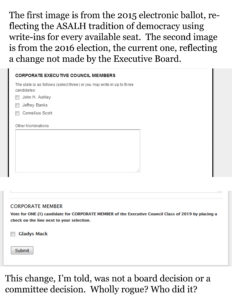 In standing up for the Woodson tradition of self-publishing, I became a persona non grata in the eyes of the new leadership of ASALH, which is increasing taking the shape of a regime.  One of the defining characteristics of a regime is the nearly universal tendency to perpetuate itself and protect its rule by eliminating the opposition, which it considers to be inherently illegitimate.

To prevent me from running for the board as a corporate member, the majority of the Executive Council voted to exclude me from the ballot for the class of 2019.   But when the opposition told them that I could indeed run a write in campaign and win, the regime ignored the concern–did not seek a change of policy–but went to work.  Without a vote of the Council, the regime created an electronic ballot that, breaking with tradition, excluded write-in candidates for the corporate seats.

We warn our children to watch what they do on the internet because an indiscretion can ruin a reputation.  But the technologically less savvy can give that advice,  but they really don’t know how deep things can get, not really.  Those who tampered with tradition for undemocratic purposes have left themselves exposed.  Here’s last year’s ballot, and here is this year’s ballot as they sit out in the open internet, going nowhere and leaving a trail of authoritarian behavior.  This goes against the traditions of the association, which has always allowed write-in candidates in elections.

As a result of the unauthorized ballot, which excluded the write in for the corporate seat only, Gladys Mack sits there alone as the candidate, no opposition–not even a potential one as a write in.  Effectively the regime is appointing her to a three-year term: She is not being elected.  (No choice, no real election.)  This is unprecedented in ASALHland for that last who knows how many elections.  But as you can see from last year’s ballot, this is not how we hold elections.

Now, keeping me off the board even if it means violating ASALH’s election practices is a must because I oppose, strenuously oppose, ending our century of tradition of self-publishing ASALH’s Journal of African American History.  What folks think of my methods matters not in this–it does not justify the means used to oppose me.   They had the power to deny me a place on the ballot, but they did not have the authority, without going to the general membership, to change the election practices.  People who agree with me were denied a choice. I received 54 write in votes for the non-business seat, and because of a paper ballot was sent out to someone who requested one, I had one vote for the corporate seat.   I am suggesting to the board that both candidates–the advantaged candidate and me–both be appointed as there are two seats available in each class.  This is a wise way to solve the problem of corruption.

Democracy in a membership organization is vital for its survival.  If members feel that people who have dedicated themselves have no voice, then they cease to belong.  ASALH must clean up its house.  The persons responsible should resign.

#ASALH2016 Is about the Jewel of ASALH Getting Over on the University of Chicago: A New Argument among the Sellouts (Updated)
ASALH Politics, Featured, Governance, Self-Publish