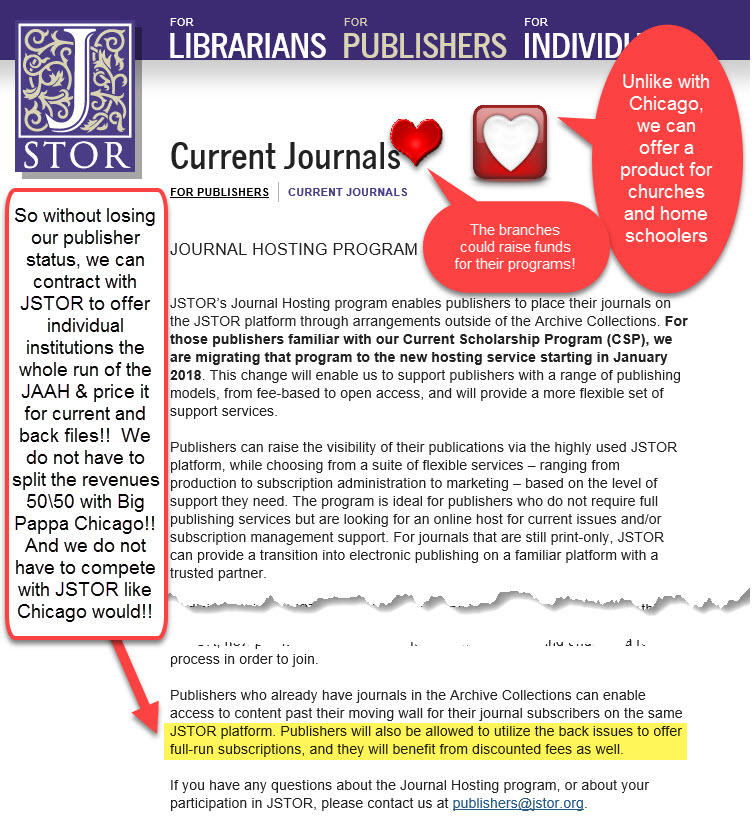 Since this effort to sell out ASALH’s century of self-publishing began, I have urged members of the ASALH Executive Board to talk to JSTOR, our twenty-year business partner, to see what they can do to keep our business.   Imagine my consternation every time I’ve been told that the University of Chicago Press, the firm trying to win our business, is handling discussions with our existing partner! You think Chicago will inform you of what advantages JSTOR might hold for you?  Of course not, and for some this heresy was never about money–it was about love and status.  When the money was close, it was obscured, but now JSTOR has a new program that reduces our self-publishing cost dramatically and makes it much more profitable to stay independent publishers.  It is now Self-Love versus the Love of Status.

Well there is good news!  And I knew there would be.  JSTOR, which has greater revenue than the University of Chicago Press and is much more profitable, had to respond to the loss of business with the University of Chicago Press and the University of California Press in 2015.  That development had to cause a shake up since they constituted the bulk of the New Scholarship Program.   Small publisher (and in the world of publishing even Chicago is small) all hoped that JSTOR could save our declining subscriber base by growing our business globally.  That failed because the move towards STM globally has limited the appetite for the humanities and social sciences journals from the US in Asia and the Middle East.  (Chicago is now pretending it can have success even without its own sales representatives, smh).  Recognizing that global and domestic marketing did not result in hardly enough new customers, it is starting a new program that is a godsend to those independent publishers do not want or really need to sign up with a publisher who has not clue on which ways the winds of academic publishing are blowing.

At the same time, ASALH would be able to pivot from the academy as its primary source of new institutional subscribers and reach out to institutions and groups within the African American community.  This is what we have historically done when the university system was not our way of making it in the world.  We can enlist our branches and our members to reach out to various civic organizations charters schools to offer a century of black life, history, and culture not simply via the Journal of African American History, but all of our publications.  This is bigly!!!

With this decrease in cost and the ability to offer a new product, we can grow our customer base without a split if 50-50 with would-be Big Pappa Chicago.  If we are independent, we can go to a local foundation and get underwriting for the entire run of all of our journals, including the Journal of African American History, and not share a red cent with the University of Chicago Press, or anyone else.  We could reach out to the Urban League or NAACP Act and make Woodson’s independently published journal available to youth who are in writing programs on grants that they have.  In the age of austerity, we find a way through as we have for a century and remain the oldest independently published scholarly journal in the entire world!!

To bring the point home: this offers ASALH great advantages over Chicago.

Why is JSTOR doing this, not love but to protect its JSTOR  Archive business.  It is a $85,000,000 a year not-for-profit primarily because of the global reach of its archive.  Where it failed at selling new scholarship abroad, its archive is gold.  JSTOR has decided to create a program that sustains independent publishing because it depends on it.

If the regime had done due diligence and talked to our long-term business partner, they would have heard of this program long ago.  But it was not their desire to continue self-publishing.  They are bent on going for the supposed status of a university press as their publisher even though JSTOR continues to offer services that are at once more stable and sustainable.

The University of Chicago Seeks to Take a Bite Out of JSTOR’s Archive Market? Self-Publishing, Self-Love, and $250,000
ASALH Politics, Featured, Governance, Self-Publish